The Fragrance Foundation brought back in-person events with a bang.

Half-awards show and half-reunion, the Fragrance Foundation hosted its 2022 Awards Finalists Luncheon in-person for the first time since the pandemic started two years ago.

“We haven’t been together for this event for over two years. For many people in this room, it’s the first time they’ve seen each other,” said Linda Levy, the Foundation’s president. “It’s a reunion and we’re all being positive.”

Attendees had good reason to celebrate. In addition to being nominated, their category is on fire. “We’re having a great moment for the industry, whether you’re super luxury or all the way down to mass,” said Jerry Vittoria, global president of fine fragrance, Firmenich and chairman of the Fragrance Foundation.

“Fragrance is about emotional connection to people, and the way we create, it needs to feed off of the positive energy of each other. So, we needed this,” he continued.

Echoing his sentiments was Lori Singer, president of Parlux, who took home a slew of nominations for the company’s fragrance with Billie Eilish.

“Fragrance is on fire, and it’s wonderful to be reunited with the industry,” Singer said. Billie Eilish’s fragrance is performing better than expected, despite initial projections to reach $50 million in its first year in sales. “The fragrance is doing fantastic, both in Ulta in the U.S. and in the U.K. We doubled the plan for the first month and have overachieved all our projections.” 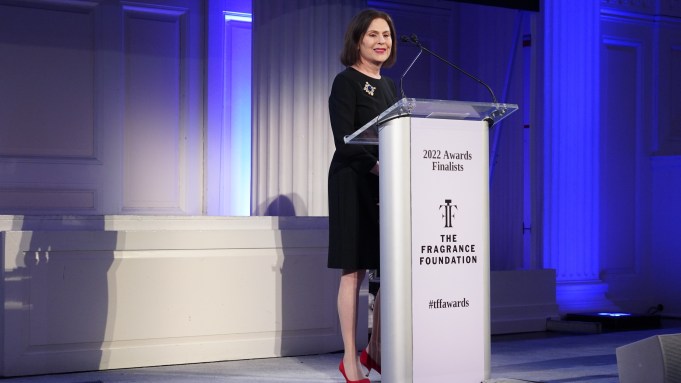