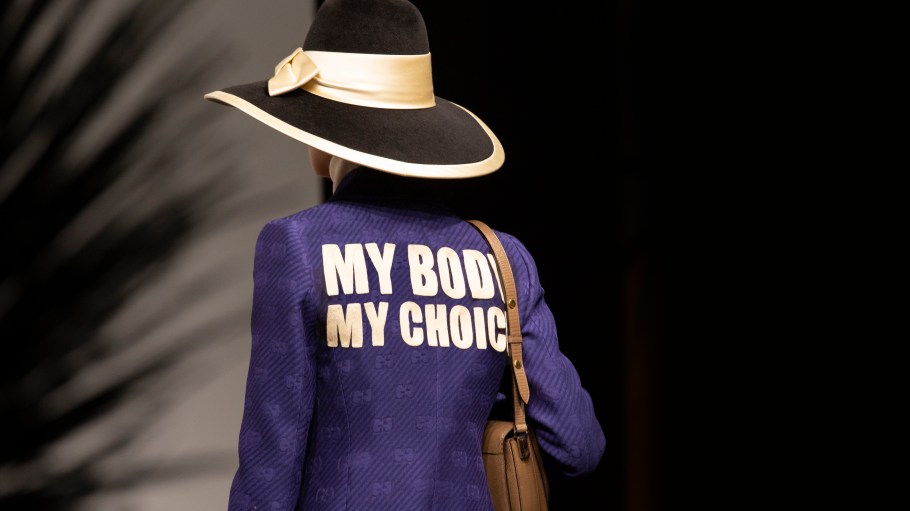 As the Supreme Court appears to be ready to overturn Roe v. Wade, Gucci continues to show its support for women’s reproductive rights.

The luxury brand issued a statement Sunday that said, “When Gucci founded the global Chime for Change campaign in 2013, the company committed to use its voice and resources in the global fight for gender equality. As we now face a critical moment in U.S. history, Gucci remains steadfast in its belief that access to reproductive health care is a fundamental human right.

“The company will now provide travel reimbursement to any U.S. employee who needs access to health care not available in their home state. Through the Chime for Change campaign, Gucci will also continue to support partner organizations that enable access to reproductive health and protect human rights, especially for the most vulnerable,” the company said.

Last week, Levi Strauss & Co. became one of the earliest voices in fashion to speak out in its support of reproductive rights, as reported. “Protecting access to the full range of reproductive health care, including abortion is a critical business issue,” Levi’s said in a statement.

Since its inception, Gucci’s Chime for Change initiatives have raised more than $19 million to fund 460 projects in 89 countries, directly benefiting more than 630,000 girls and women globally. The company has also raised funds for International Planned Parenthood Federation in support of services for sexual and reproductive rights since 2013.

The $19 million raised supported hundreds of projects across the globe, with partners such as Equality Now, the Global Fund for Women, Ms. Foundation for Women, Mothers2mothers, UN Women and other diverse feminist organizations and movements led by and serving women of color, Indigenous women and girls, young feminists, disabled women and girls, transgender expansive women, and other groups who have been historically marginalized.

In 2020, Chime for Change teamed with the Kering Foundation to launch #StandWithWomen, a campaign to expand funding for nonprofit organizations supporting women and girls and addressing gender-based violence that has intensified since the COVID-19 outbreak. Support from Chime for Change and the Kering Foundation has helped these global partners continue to mobilize for the safety, health and justice of all women.

Last year, Gucci joined the Generation Equality Forum as the private sector lead on the Feminist Movements & Leadership Action Coalition. Convened by UN Women and cohosted by the Governments of Mexico and France in partnership with youth and civil society, the Generation Equality Forum is designed to accelerate actions and global commitments toward gender equality by 2026. During the Generation Equality Forum in Paris, Gucci revealed a series of financial, policy, programmatic and advocacy commitments for the next five years, including $2.5 million over the next five years for direct, core, flexible, multiyear funding to feminist organizations, groups, movement and activists, and developing and implementing a worldwide public awareness campaign calling for the global community to #ActforEqual, estimated at $15 million in pro-bono media placements over the next five years, among other commitments.

Gucci has spoken out about reproductive rights for some time — even through its clothing. During the cruise 2020 collection, Alessandro Michele, creative director of Gucci, showed pieces that featured various messages, dates, numbers and motifs. Some of these referenced key historical moments and included “22.5.78,” referring to the date the Italian statute 194 was established for the social protection of motherhood and the voluntary interruption of pregnancy. The collection also paid tribute to the 1970s, a key time period in the women’s movement and the fight for gender equality, including the slogan “My Body My Choice” prominently featured on jackets, sweaters and T-shirts. Sales of the T-shirt benefited Planned Parenthood.

Further, the Gucci Tribeca Documentary Fund provides finishing funds to feature-length documentaries that highlight and humanize issues of social importance from all over the world. Several projects have been supported that spotlight the lives of women and committed agents of social and environmental change and shed light on the ways they are working to improve their communities, futures and the world.

As reported, Chime for Change will cohost “22 For ’22: Visions for a Feminist Future,” a virtual gender equality summit produced by The Meteor, which will be streamed globally beginning Monday at 7 p.m. ET. The program includes a conversation with Colombian human rights lawyer Paula Avila-Guillen about the “Green Wave” movement across Latin America. The event is free.

Many Chime projects have addressed sexual health and reproductive rights, as well as maternal health to provide women with the information, resources and services they need to make the best choices for themselves, including the Chime Zine, which was launched in 2019 with eight editions to date including content focused on reproductive freedom.